After much hard work we have finally managed to secure a new venue at Carrick Pigeon Club.

The full title is Carrick and District H.P.S. but we will stick to the more commonly recognised short version. 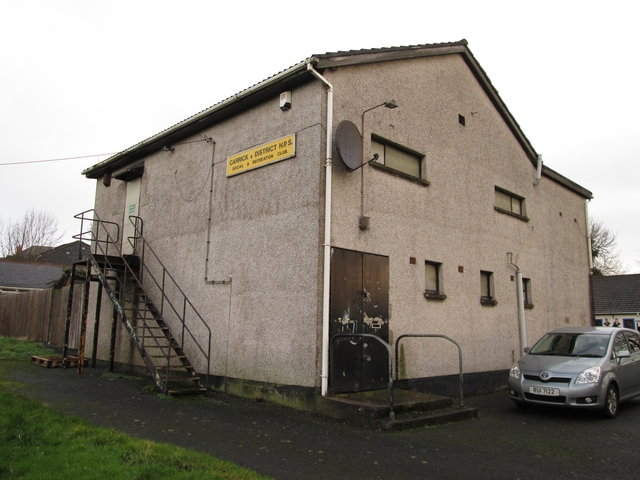 A new page has been added to the website here, so that regular reports and updates will be kept together. We will thus create an easily accessable record of the project.

The growing season is over for this year. We did not get much produce but a basket of potates provided enough to share. In the future we plan for year round cropping but that takes a lot of planning and this year most of our energies were put into getting the structures done.

Today Colin and James completed the windbreak all the way round the plot. Colin had put in the posts on Friday. This establishes our border and most importantly keeps dogs out.

We will be working right through the winter weather permitting 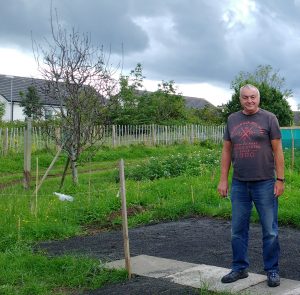 Paul’s Plum tree survived! It is still in a state of shock but having dropped all of its’ leaves, Colin spotted that it has now started to replace them.

We really could do with some more support. It may not be apparent from the picture but Paul’s tree is not the only thing that is growing. Potatoes are in flower, corn has set ears, the other stuff we planted to growing well BUT so are the weeds! We have been doing a lot of necessary work on hard standing and the weeds are getting out of control. 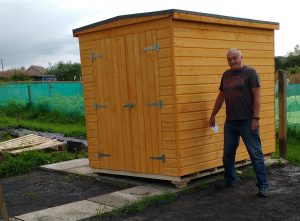 The good news is that we are now the proud owners of a really good shed. Some grant money became available to us, so we invested it wisely. The shed was built to order with double doors to allow access for those with mobility problems. A ramp will be provided A.S.A.P.

As well as the shed we have purchased some tools to enable more people to get involved. Will you be one of them? Please! We are there most Tuesdays and Fridays for about two hours from 10 a.m. Please check with Colin before you go. If we are not going to be present you can get the shed key and work away on your own – or bring a friend. 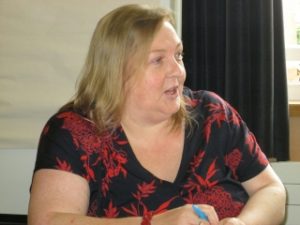 Catherine is the Community Development and Planning Officer.

David Meek met her at a function and shared our problems about obtaining a suitable premises to meet at. She said she would come to have a chat with us.

We had an open forum where our members chatted freely to her about our frustration with the council who seem detirmined to NOT let us have access to the Ranger’s facility even though it has been agreed with the football club.

We provided quite a few examples of completed projects to demonstrate the many talents that our members possess and want to share with others if we only had premises to do so.

We also made her aware of our community involvement with Model Primary School and Carrickfergus Manor.

Catherine listened intently. She was honest in telling us that she was not able to promise to solve our problem because premises of the type we seek are not easy to obtain. However she did make a commitment to help as much as she is able and to “make the journey as painless as possible”. 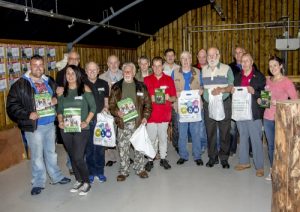 A remarkable day out with few other Men’s Sheds. Pictured here at the end of the day along with Janine and her colleague Pamela who organised the event. The day was arranged as part of Men’s Health Week hosted by South Antrim Community Network and funded by Public Health Agency. Naturally some segments were more obviously health related and others were just great fun.

Basic Health Check: Pharmacy assistants were available to check blood pressure and blood sugar levels. It was a worthwhile activity since at least two of the men were advised to make urgent appointments with their G.P. for treatment.

Laughter Yoga: Can’t help it men – I thought they were having a laugh! But apparently this is a bona fide form of Yoga (Hasyayoga) Check it out at Laughter Yoga University.

Team Building: We were divided into two teams to add a little bit of friendly competition to the exercises. There was a multi-person ski race, a ground ladder race and some large puzzles of a size that a dozen people could stand round and cogitate over, and more.

Lunch: The usual burger and chips prepared at an outdoor kitchen. Basic food but eaten enthusiastically after the morning’s activities. Made even tastier by the fact that it was provided F.O.C. – our favourite price.

Finally we had a go at Clay Pigeons.

Truly a most enjoyable day. Read the full jungle_report with pictures.

Following a request from The Model Primary School in Carrickfergus, the Men’s Shed agreed to Volunteer to help with the School’s garden and Gardening Club.

This is how the Garden looked when we arrived on Monday 5th June . 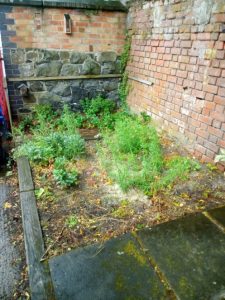 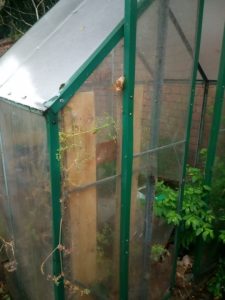 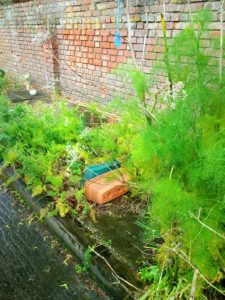 After only 2 days work by the Men’s Shed’s two volunteers, the existing Strawberries can now be seen as can the Broad Beans. The beds have been dug over, ready for the Gardening Club to plant some flowers and vegetables and the Green House has been tidied up. 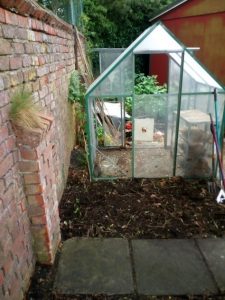 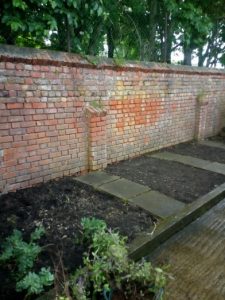 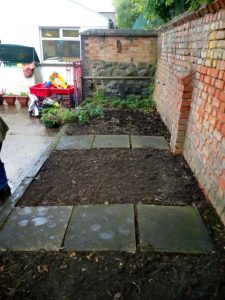 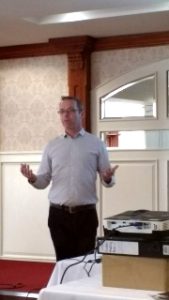 Barry Sheridan CEO Called the meeting to order and took the first segment. I was surprised to learn that the IMSA started just 6-7 years ago but already has 382 sheds representing in the order of 10,000 men. This includes 89 added in last 12 months. Apparently we have more sheds per head of population than anywhere else, making Ireland the world leader in this field.

Barry emphasised more than once that men are most important. “A shed without men is just a shed. Men without a shed is still a community. “Mens’ Sheds meet in all sorts of venues, Community Centers, converted shipping containers, portacabins and even though they are expensive – Business Centers. It seems contradictory, but some men’s Sheds have no venue at all, meeting only to go on outings or to have a meal together.

On the question of finance, Barry pointed out that many Sheds have no funding at all. They are self sustaining, raising finance in many different ways. It is however most important to remember that a Shed is not a business but a social activity.

If you are fit enough to work from 10:00 to 16:00, You could volunteer to help out clearing Rhododendron overgrowth at Killarney National Park. As an incentive, free B&B and Evening meals are provided. I fancy an October holiday – it could be a blast. If you are interested please see me (James) and I will get more information.

We are delighted to announce that we are now the proud tennants of an allotment at Eden.

If you want to visit, it is Allotment B36. Enter field B by the Central Car Park Entrance, turn Left and go to the bottom of the field. We are the last allotment on your right.

There is not much to see at the moment, just some steel markers with blue rope round them. It has been arranged to have it rotavated for us but the grass needs to be strimmed off first. We have the use of two petrol strimmers but need some people to use them and others to help tidy up. 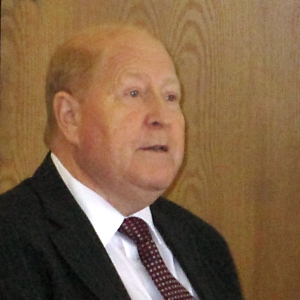 Jim talked to us about the history of Carrickfergus, his theme being “Royal Visits”. We were informed that the town of Carrickfergus has been in existence since medieval times. The earliest known name for the area was Dun-so-barky, meaning “strong rock or hill”. It gained the current name under tragic circumstances. In the sixth century, Fergus Mor, the son of Eric of Armoy, left Ulster to found a kingdom in Scotland but was drowned on his return. The area was thereafter called Carraig Fhearghus, meaning “rock of Fergus”.

In 1183, the Anglo-Norman knight John de Courcy invaded Ulster and established his castle on a volcanic dyke at Carrickfergus. Between 1203 and 1205, De Courcy was ousted from Ulster by another Anglo-Norman knight, Hugh De Lacy. De Lacy finished the construction of the castle, building the gatehouse, drum towers and outer ward. Hugh was a bit of a rogue.”

In 1210 King John arrived at Carrickfergus, expelled De Lacy and took the castle into royal authority. Some say that this took no effort at all since Hugh, knowing full well that he deserved it, fled to France. 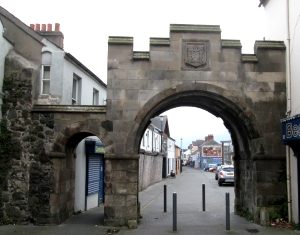 Carrickfergus found itself entangled at the very heart of national and European politics when, in 1688, the town and castle were held by the garrison troops for James II, despite local overwhelming sympathy for the Williamite cause. In 1689 Frederick Duke of Schomberg landed with Williamite forces at Groomsport, Co Down. The siege of Carrickfergus began on August 20 with heavy mortar bombings, causing a breech in the town wall near north gate. The defenders drove cattle into this breech and shot them to block it up. Never-the-less, The surrender of the garrison troops took place about seven days later. This picture is of the North Gate as it stands today.

June 14, 1690, King William of Orange stepped ashore at Carrickfergus destined for the Battle of the Boyne, where he defeated his father-in-law James II and claimed the English crown for himself.

Jim was at pains to point out that William was supported by the Vatican for purely selfish reasons of their own.

1885 say a visit from Queen Victoria’s son Albert Edward and his wife Alexandra. The piers of the harbour are named after them.

Bringing the story up to date, Carrickfergus had a visit in 1961 of our current Queen Elizabeth II followed in 1987 by Prince Andrew and in 1988 by Princess Anne. 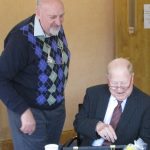 As a token of our thanks for his visit, Jim was presented with a Carrickfergus Men’s Shed Mug (with Easter Eggs) and Alan offered him the choice from his selection af hand turned wooden pens.