Mark McWhirter, Watch Commander, introduced himself with a short description of his 20 years experience in the Fire Service. Like many other fields of endeavour, codes of practice have changed dramatically over that time. 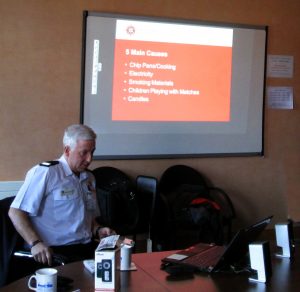 Mark went on to use a computer presentation with slides and video clips to illustrate his “Home Fire Safety Advice”. The main points were introduced by the simple acrostic S T O P
Smoke Alarm
Test Alarm Weekly
Obvious Dangers
Plan Your Escape – these points were then expanded on in some detail.

Mark made us aware of a number of services provided by NI Fire & Rescue Service including free home fire safety check. You may request this free service on line (click the NIFRS above) or
Telephone 028 9260 0477. Dependant on circumstances, some may qualify to have free fire alarms provided and fitted.

Some leaflets were available for those who were present on the day. If you missed out, go to Home Fire Safety Advice .

Lyn Campbell started her talk by asking “What is a Carer?” The very simple answer is “Someone who cares for another person”. There are thousands of people in our community who function as a carer, without realising that they would receive recognition and assistance if only they would ask.

A number of our men shared their personal experience, pointing out a number of flaws in the carers allowance system and support for carers. Lyn acknowledged that this was, in fact, the case but assured us that her organisation is constantly campaigning for improvements. She made freely available, a number of booklets, leaflets and calendars.

On 18 February 2017, six of our shedders joined with members of Friends of the 36th (Ulster Division) Carrickfergus and the Cairncastle Somme Society. We were somewhat concerned as we started out because the weather was miserable. By the time we arrived at the museum it was dry and we had a very memorable day. 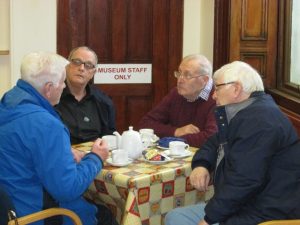 On arriving at our destination, we were treated to tea and scones before being taken on the WWI Trench Experience. This is the largest outdoor WWI replica trench open to the public in Ireland and the UK.

We were privileged to have as our guide, Dr Michael Finnegan, Research and Education Officer. He does not usually attend on Saturdays but said he was pleased to do so for our party. Michael gave a thought-provoking introduction about developments in Irish politics in the early 1900s. We were then taken on a tour of the trenches exhibit. This was informative, well presented and the trenches were realistic enough to give both a flavour of trench warfare and pause for thought about the many boys ( some as young as 14 years old) and men who lost their lives in that terrible conflict.

Lunch consisted of soup and sandwiches, both of which were delicious, tempting some of us to overindulge. We had a short time to peruse the other exhibits in the museum before boarding the bus again for our homeward journey.

All six of us who represented the Men’s Shed, agreed that it was a very worthwhile trip.

Our sincerest thanks go to Tommy Kirkham for organising the trip; to the Housing Executive for S.P.O.D. funding – making it free to us; to Dr Michael Finnegan for delivering an excellent tour and to museum staff who fed us so well. 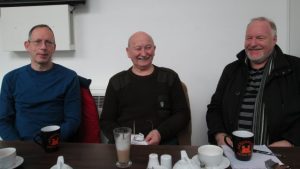 Our committee met with Carrick Rangers FC to agree the basis of our relationship with them. The meeting was productive and both sides were happy with the arangements discussed. A document will be prepared and signed by both parties. Due to previous commitments this may take up to ten days. Upon completion of this task we will be given access to the facilities.

The work of making necessary changes to the facility will begin as soon as we have the keys. We have been promised some paint and plan to keep other expenditure as low as possible. 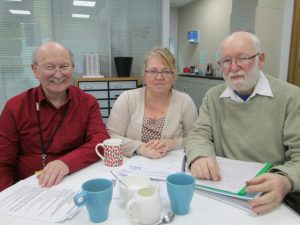 Fred and James had a very profitable visit to the Irish Men’s Shed Association office in Ballymun, Dublin. Our application to be included in the association will be put before their board on Friday 3 February. We have been assured that since we have our governance, bank account and insurance in place, it will just be a formality. The fact tha

t we have already had a visit from Geraldine Nelson, Support Representative, is also in our favour.

We were provided with some materials for Carrickfergus Men’s Shed, the IMSA Handbook and some sound advice.